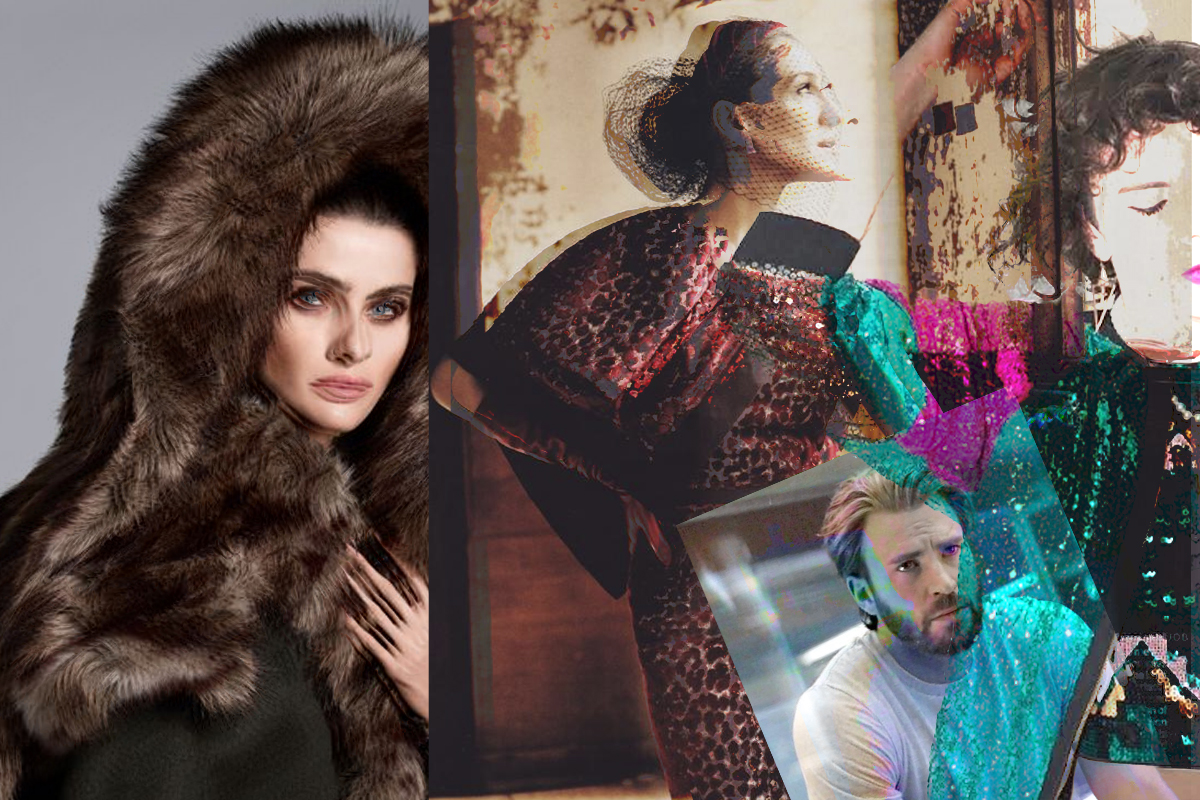 Don't miss this:
The Impact of Fashion on Society - What? Why? When? Where?

The Powerful Message Behind the Most Political Met Gala Looks

A deeper view on some of the most iconic political statements that took place at the Met Gala. 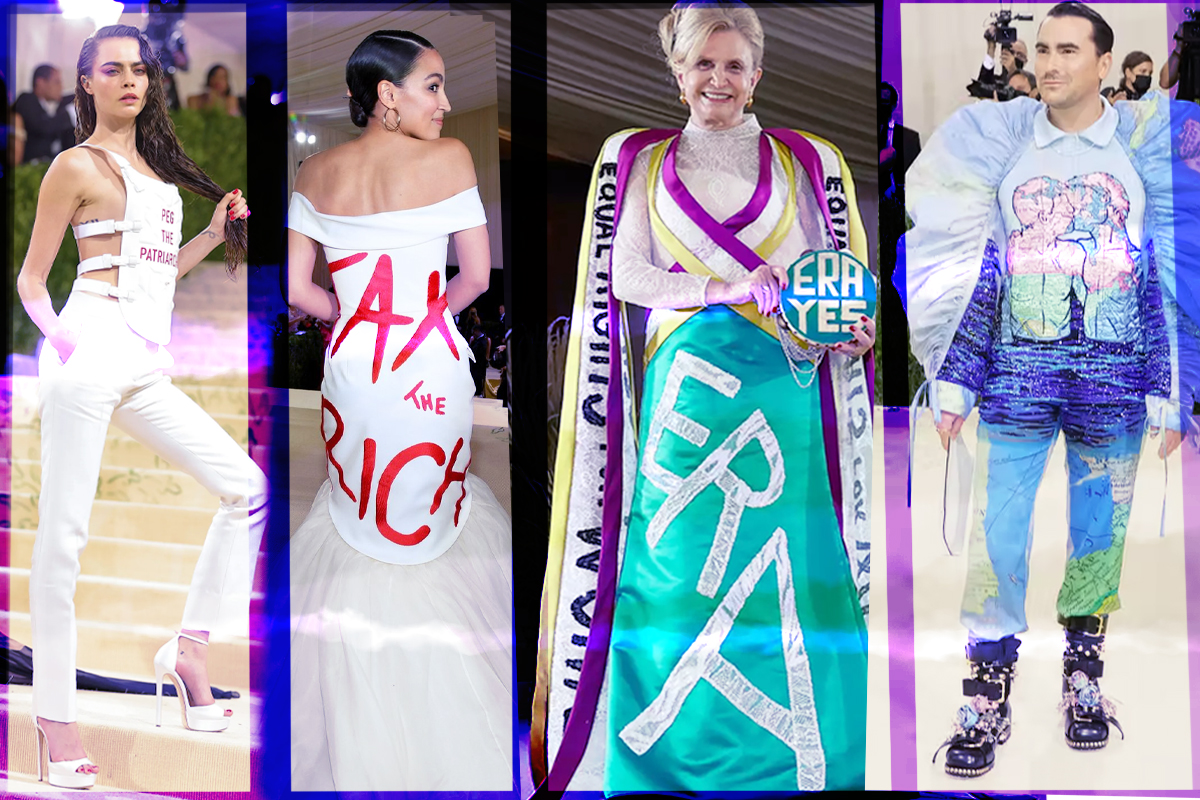 The red carpet is where many fashion statements occur, and emerging trends begin. It is an opportunity and almost a task for many to stand out and be the night’s headline. Others use fashion as a medium to communicate messages or start a conversation.

In the 1920’s theater producer Irene Lewisohn, and stage designer Aline Bernstein, created a collection of costumes that designers could find as a source of inspiration and appreciation. In the middle of the jazz era and cancan, there were many costumes, accessories, and props that served great performances across the city. By 1946, the collection had grown so much that it officially joined the Metropolitan Museum of Art as the Costume Institute.

The creation of the Met Gala is attributed to the legendary fashion publicist Eleanor Lambert, who thought of an annual gala serving as a fundraiser for the Costume Institute. Eleanor Lambert named this midnight supper “the Party of the Year” and sent exclusive invitations to well-known people in the fashion industry.

The Met Gala took a different direction with Diane Vreeland, who served as the editor-in-chief of American Vogue in the 1960s, curating colorful covers, pages, and content that refreshed the publication and attracted many more readers. In the 1970s, she was fired because of the magazine’s desire to have a different perspective more aligned with the vibe of that decade. That’s when Vreeland joined the Costume Institute as a consultant and gave a major renovation to the Annual Gala closer to what we are now familiar with. She got well-known names to co-chair the event, such as Jackie Kennedy, who co-chaired twice, and the event became a great way to spread the word about the annual exhibition of the Costume Institute.

But it was until Anna Wintour became part of the organization of this event that it went from being another fancy party in Manhattan to a spectacle watched around the world. Anna Wintour started incorporating pop culture figures in Vogue covers, like Gwyneth Paltrow and Oprah Winfrey. Before Anna, most covers featured beautiful models who people in the fashion industry mostly knew but rarely outside of it.

The Met Gala became a red carpet spectacle because remarkable people in the entertainment industry, business, and politics started to be encouraged to attend this event with statement fashion that aligns with the exhibition’s theme.

As the Met Gala is now a stage to communicate messages that will be seen, it is an event where Political Fashion takes place. When guests want to start a conversation about a specific issue or raise their voice around a topic, it’s not surprising that they will use fashion to communicate this message. Because fashion is a medium, fashion is political. Now, let’s take a look at some Political Fashion moments that we have seen at the Met Gala.

We have seen in previous years that some Met Gala looks have included huge headpieces, 3D printed fashion, wearable pieces of art, and actual performance on the carpet. (Yes, Lady Gaga in 2019)

Cara Delevingne’s Feminism on the Steps of the Met

In the 2021’s edition of the Met Gala, Cara Delevingne arrived on the red carpet wearing a Dior custom-made outfit. A pair of Dior Couture 30 Montaigne tailored white pants with a leather breastplate emblazoned with the phrase “Peg the Patriarchy.” Although the political message is quite clear with a red graphic, the context gives a deeper meaning to this Cara Delevingne’s Political Fashion moment.

Cara Delevingne is a huge women’s advocate. In recent years, she became the co-owner of the women-owned sex toy company Lora Di Carlo. Delevigne is very open about women’s pleasure and opens the conversation to her followers about breaking stigmas around women practicing sex and self-pleasure.

An interesting aspect of this look is the contrast of high fashion with bold graphics. The pants are tailored to fit the model spectacularly, and the white leather underneath the red statement is very elegant. Delevingne shared that this outfit is a result of a conversation she had with Dior creative director Maria Grazia Chiuri and her team. It is a political statement with the sophistication and construction that the House of Dior is known for.

Looking at the past to think about the future

Congresswoman Carolyn B. Maloney looked into a key historical moment in the Women’s Rights movement, and it became the inspiration for her Political Fashion moment at the 2021 Met Gala. The Congresswoman wore a floor-length gown designed by Lebanon-based fashion house Antonios Couture. The dress had sashes embroidered with “equal rights for women.” Maloney also wore a bag that said: ERA YES, as a tribute to the Equal Rights Amendment.

On the evening of the celebration, Maloney explained further the message of her dress on Twitter:

Across the country, women’s rights are under attack.

I have long used fashion as a force 4 change. As the Met Costume Institute reopens w/ their inaugural exhibit celebrating American designers, I am calling 4 the certification of the ERA so women can be equal once and for all.

It’s not the first time that Maloney has worn Political Fashion to the Met Gala. In 2019, she wore a bright yellow dress and an official F.D.N.Y. jacket. Although it was widely criticized for the color and the overall aesthetic of the look, it served to raise awareness about the 9-11 compensations fund. The Bill passed the senate a couple of months after this event.

De Jager is a beauty guru with more than 13 million Youtube subscribers. In 2020, the makeup artist came out as transgender after being blackmailed. In a 17+ minute video, the makeup artist said that the chance of choosing the right time to come out to her fans was taken away from her due to the blackmailing. But she felt confident and happy to share that part of her with the audience, as she wouldn’t have the need to keep it a secret any longer.

In 2021, Youtube chose Nikkie Tutorials to attend the Gala with the theme “America: A Lexicon of Fashion.” Nikkie used this opportunity to talk about an important part of American history, which is also part of LGBTQ+ history, and the world’s history. Nikkie Tutorials tributed Marsha P. Johnson in her Political Fashion Met Gala look.

Marsha P. Johnson was an American LGBTQ+ activist, founding member of the Gay Liberation Front, and an important participant in the Stonewall Riots of 1969. Johnson later became an important figure in New York’s art scene, modeling for Andy Warhol and doing drag performances in popular clubs and bars.

Marsha P. Johnson is an important name in LGBTQ+ history, but for many, it’s unknown since LGBTQ+ history is barely starting to be studied and mentioned in spaces that are not conducted by LGBTQ+ members.

The tulle green gown that Nikkie wore at the Met was designed by Dutch couture house Edwin Oudshoorn. It included a floral headpiece, and in the lower part of the dress, a sign that reads “Pay it no Mind” was hanging. This was Johnson’s motto.

Gabrielle Union wore a stunning white gown designed by Iris van Herpen called “Aeternus.” The gown took over 1400 hours to make. It required over 10,000 spheres that the team cut and layered in gradients to create an optical illusion where the waves seem to be floating.

The designer stated that this piece would be auctioned off by Sotheby’s, and all of the proceeds would be donated to the Amazon Conservation Association and the Rainforest Trust. A clear example of how high fashion that creates headlines, that is inspirational and empowering, can also become a fundraising piece of art for crucial climate change matters.