Don't miss this:
Cinderella: The Misleading Fairy Tale, the Classic Fashion, and the Hopeless Myths

How Maluma's fashion is redefining the established rules of menswear

Chameleonic, bold, and authentic. Maluma’s outfits tell the story of a brave Colombian singer who is not afraid of challenging the expectations of a male reggaeton singer. 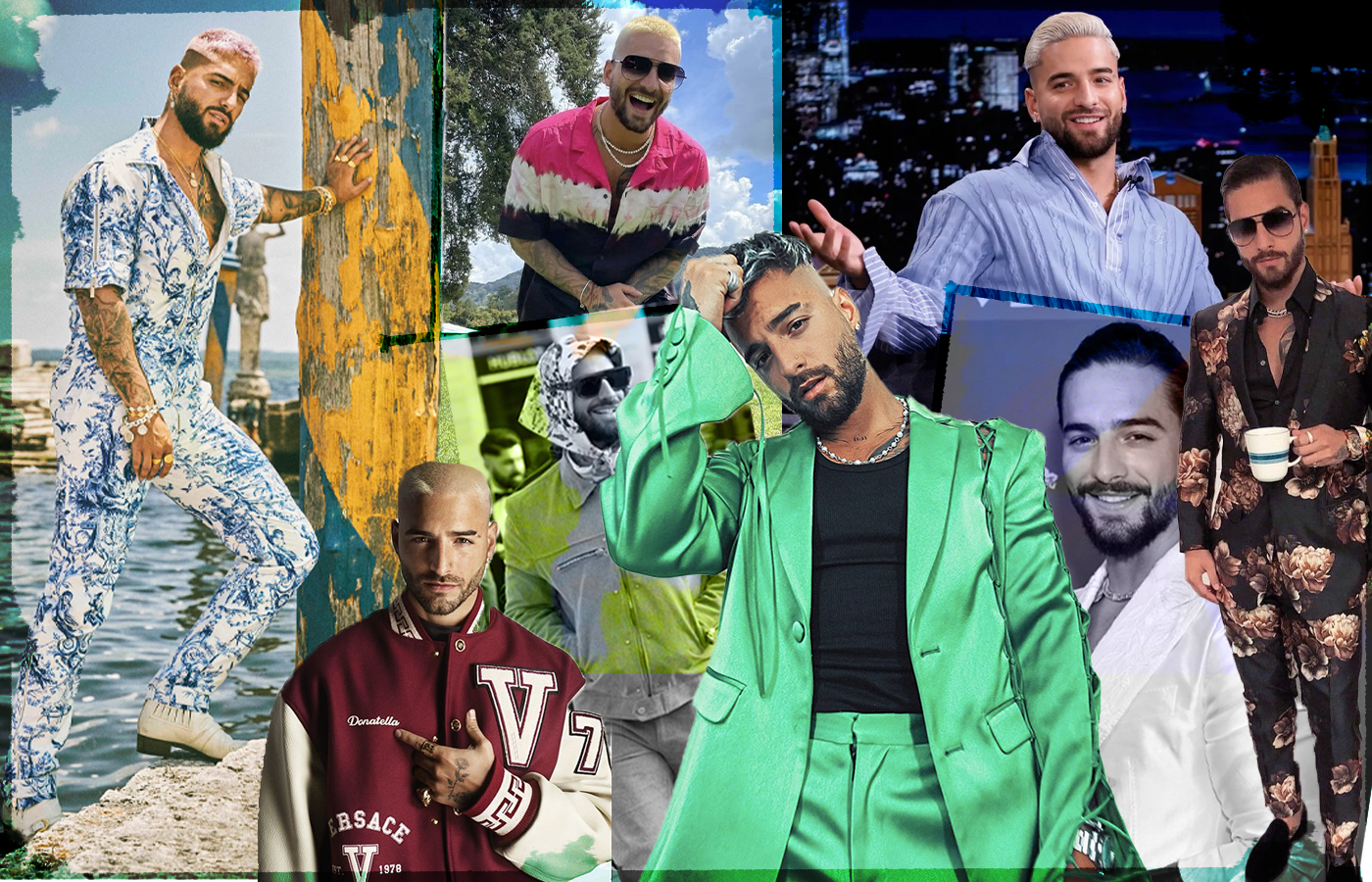 The process for reggaeton stars to be recognized as fashion icons took a long time. Daddy Yankee was the first artist to introduce this type of music into mainstream culture with La Gasolina, which now has become a timeless song that people sing in the bars and celebrate in Tik Tok challenges. But many pushbacks, rejections, and prejudices made reggaeton take a very long time to become popular music that would be played in music festivals and celebrated in awards ceremonies as we see today.

As many fashion designers have now become good friends with some reggaeton artists, they have created strong partnerships that benefit both sides. The work of fashion designers is seen by a wide international audience, and the singers are wearing intriguing clothes that captivate the audience.

There is much to say about this phenomenon, which is why today, we’ll focus on an artist whose style in music and fashion has evolved. His name is Juan Luis Londoño, but most of us know him as Maluma. Today, we’ll focus on some of his major fashion statements and how they are shaping our perception of men’s fashion and the doors that are opening for emerging reggaeton artists in the future.

The jewelry marketed and designed for men is very limited in terms of design. With only a few iterations of chains that rappers have made popular, the whole thing seems very predictable. So whenever a man takes a step forward thinking of jewelry as a true accessory to enhance a look, people get inspired and excited.

Maluma has shown us on different occasions that he’s not afraid of using jewelry. Although it may often be seen as ostentatious or poor taste, there is enough room for creativity when you are an international artist with the resources to get all kinds of jewelry.

An exhilarating Maluma fashion moment happened when he posed for the Rolling Stone cover. With a white t-shirt and a denim jacket, Maluma enhanced the look with bracelets, earrings, pins, and necklaces, including a Chanel piece.

We know that Chanel has never offered menswear or men’s accessories. Although many male public figures have purchased products from this French fashion house, these products are still marketed and targeted to be purchased by women.

It is a significant statement that Maluma, a cisgender reggaeton male singer, poses for Rolling Stone magazine, wearing accessories that “were meant” to be for women.

Another particularly special jewelry piece that Maluma has worn is the custom-made diamond necklace created by Joseph Klibansky, Avi Hiaeve, and “El Russo.” The chain of the necklace has what looks like bone treats for dogs, with a huge dog gold sculpture dressed as an astronaut covered with diamonds. The shape is inspired by Maluma’s dog Buda, and the creation of the necklace took three months.

We saw Maluma wear this spectacular jewelry piece, first at the F1 Grand Prix in Miami, where he wore a red suit with black zipper details and sunglasses. A few months later, we saw Maluma in the front row of Jean Paul Gaultier’s show in Paris, with a full outfit created by this fashion house and styled with the jewelry piece. Although some fashion critics and internet users have labeled this necklace as “unnecessarily flashy” and “ostentatious,” it is a fashion statement for Maluma. The fact that he has chosen to portray his dog in a custom jewelry piece that will prevail in time speaks volumes about his affection for his pet, which is why his fans and followers scream with excitement every time the singer wears this necklace in one of his concerts.

We are going back to a huge trend from the 90s where everything is about the logos. The bigger, the most visible the logos are, the better. We saw full tracksuits in Fendi X Skims collection with a combined logo of both brands. We saw logos again in Adidas and Gucci collab, and we will keep seeing them in more fashion shows, collaborations, and streetwear brands to come. So, if many fashion brands are covering their clothes with logos. How do you stand out in a crowd full of typography?

There’s something special about monochromatic looks. Since the whole outfit has only one color, it elongates the body figure. It makes you look taller and, therefore, you stand out from the crowd. When the outfit has a neutral tone, such as black, white, nude, or grey, there’s an element of sophistication as well. This is how Maluma is adapting the logomania trend to his style, with a truly sophisticated Dior printed outfit that honors the famous newspaper collection John Galliano designed for Dior in the early 2000s. Maluma’s shirt, pants, and bag are fully covered with the iconic newspaper print, which goes along with the logomania fashion trend. But this is an iconic print with Dior’s logo, one that many fashion followers will remember from the Sex and the City episode where Carrie Bradshaw goes to talk to Big’s ex-wife during her lunch break. We saw Carrie in that dress again for the second Sex and the City movie.

This is how clothing becomes special; when there are so many logos and collections season after season, those that create memories become truly meaningful. There may be Maluma fans who don’t know who Carrie Bradshaw is. Maybe Maluma himself is unfamiliar with this character. But let’s remember that he has a team of stylists who curates his outfits and social media posts to generate impact. And with so many high fashion pieces covered with logos and so many of them that lack authenticity with generic graphics and an empty story behind them, this Christian Dior looks spectacular in Maluma. He wears clothes with a rich history that align with his style and celebrate who he is as an artist.

There are artists, and people in every industry, who can wear the same style of jeans for years, maybe even decades. Their clothes get old, and they simply replace them with the exact same style without stopping to see how fashion has changed and what other styles are available. Even though we have an established personal style, and no trend or designer should change who we are, there is an opportunity to be open to what we might find interesting. Trying different fabrics, different stores, alternative shapes, and innovative prints or designs puts you at risk of finding clothes that look spectacular on you and that you may find interesting and enhancing.

As years have passed, Maluma’s style has evolved. Many artists change their clothes as they promote and live the work they are creating, the way Lady Gaga dressed in painted dresses when she released Artpop or the way Taylor Swift showed us dozens of red iterations when promoting the single named after this color. But Maluma’s style evolution has no specific theme; he’s simply wide open to trying clothes that he finds interesting. We might see him wearing a pink Chanel sweater and pearls one day, and the next one, he wears a black leather jacket with cowboy boots and blonde hair. Fashion is a form of expression, and we can express ourselves differently one day after the other because we are constantly changing as our emotions and our thoughts change.

In 2018, Maluma was into formal attire. We saw him wearing suits and tuxedos in different colors during his concerts and in his music videos.

Maluma has had some pretty cool fashion moments where he was truly experimental, like when he was invited to Jimmy Fallon’s show, and he showed up wearing an oversized tricolor outfit styled with a sweater, a shirt, and pants.

A relevant factor in this outfit for those sneaker fans is that Maluma wore one of the most desired pairs of sneakers from the first two decades of the 21st century. These are the Travis Scott x Air Jordan 1 High OG shoes, priced in Farfetch for over 600 USD. Image Courtesy of Jimmy Fallon.

One of the biggest fashion moments in Maluma’s career happened in his second appearance at the Met Gala in 2021. Maluma became Donatella Versace’s male muse. Not only did he become the main character in Versace’s campaign, but he also showed up with the Italian designer herself on the Met Gala’s carpet, wearing a custom-made outfit that got him international attention from many people in the fashion industry.

The theme of the Met Gala was In America: A Lexicon of Fashion. Donatella Versace got inspiration from North American cowboys, creating a glamorous red leather outfit with a jacket and pants and a shiny gold top underneath. There was also a metallic golden glove with embellishments that made the whole look cohesive and fashion-forward.

Maluma’s fashion sense is a great accomplishment not just for the evolution of fashion but also for the perception of men’s fashion that male reggaeton listeners may have. There are still many prejudices around men being interested in fashion and knowing about it. This is why reggaeton and rapper singers’ fashion remained the same for a very long time.

So when someone like Maluma, a Colombian singer and artist, wears a pearl necklace, dyes his hair blonde, and still sings cool songs that become major hits around the world, it’s not just a glamorous moment retrieved by fashion editorials. It is political fashion. Our perception of men’s fashion is changing because of strong people from different industries and backgrounds who are pushing the boundaries for change. We celebrate great music, and we also celebrate pioneers challenging the status quo. Maluma baby!

Tagged:
Genders + Fashion
Dress to Impress
Share this story with friends and family: