Don't miss this:
Idealization in life, love, and fashion. The dangers and problems

A Guide to Ties: Why Do We Wear them and What Do They Communicate?

The Origin of ties and their evolution. 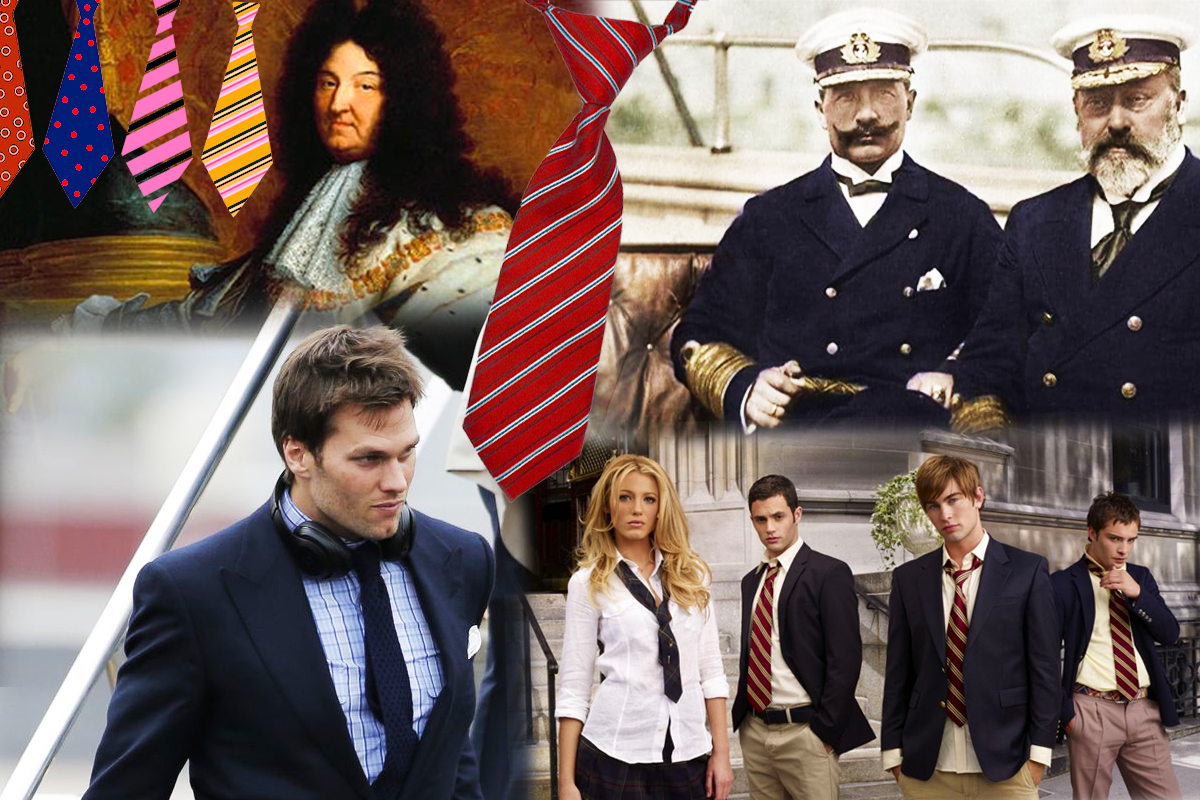 Formal menswear is easily recognizable across different periods. For a long time, it involved heels and wigs. Later in the 20th century, a hat was essential for the formal men's look. But throughout this time, there's been an element that has evolved yet has been part of formal menswear, elegance, and sophistication: the tie.

For many years, we've had ties as part of our formal - business attire routine. We put the trousers on, the shirt, the tie, we button up, and we go to start our day. But let's stop for a second and ask ourselves. Why do we dress like this? Who decided that a piece of fabric around your neck makes your look formal? Is there a meaning behind the wide variety of ties currently available in stores? Fashion is fascinating when we appreciate its diversity of colors, designs, and textures, but it's even more interesting when we know the origin of our garments. Their history, their evolution, and how they acquire the silhouettes in which they are presented nowadays are delightful.

So Where Does the Tie Come From?

We've been wrapping stuff around our necks ever since the early years of human civilization. In Ancient Egypt, over four thousand years ago, Pharaos used a form of ties adorned with precious stones. Over the wide and precious variety of neckwear in Ancient Egypt, a piece named by archeologists as: "The Knot of Isis" is probably the first version of the tie as we know it today. Researchers found mummies with knots around their necks to hold their garments. Its name is related to Isis, the goddess of healing and love, and has nothing to do with the terrorist organization "Isis" we know today. (Egyptian Museum)

Many years later, the birth of the necktie specific to menswear took place.

It was the 17th century, and one of the most brutal wars in human history was taking place. King Louis XIII recruited many soldiers from Croatia, Bosnia, and Hungary. The king sent these soldiers to fight in the Thirty Years' War. They left their house and their family, knowing they might not make it back home. The soldiers' families knew that in case they died during the war, it wouldn't be possible to recover the body and have a funeral based on their spiritual beliefs, which was a very painful thought for the family as the war seemed endless and many soldiers continued to be sent to to the battlefield as many others were losing their life.

The Croatians were fighting on the Hambsburg's side, and that's where the name "cravate" (tie in french) first appears.

"Croatian" in Croatian is "Hrvat," but since the french struggle with the pronunciation of the h, the sound evolved to become "cravate." (The New Federalist)

When the warriors returned home, king Louis XIII received them. He immediately noticed their cloth wrapped around their neck and reacted cheerfully while seeing it as a very "elegant piece." The king started wearing this interesting piece of cloth around his neck, slowly introducing it to the French Royal Court, becoming a signature piece for the aristocrats. They wore ties made of silk and fine embellishments to make this piece sophisticated and elegant.

The role of the "cravat" in fashion became particularly important when Louis XIV became the king of France. As many historians often describe, Louis XIV was egocentric and wanted to be the best at everything. The "Sun King" wore the biggest wigs as they communicated power, and wore cravats as part of his regular attire. This neck accessory was so important to him that he had an official "Cravatier" who had the honor of curating a carefully selected collection of cravats for the king to choose from every morning when getting dressed. These cravats were ostentatious, rich, and full of colors, designs, and embellishments. Most of his cravats were made of lace imported mainly from Venice or Flanders.

The first version of the tie was very similar to a scarf. It was wide and wrapped around the neck. Its shape evolved throughout the years, with a particular change in 1692 when the French soldiers were surprised by an English squadron, and the soldiers had to wrap their tie quickly, so they folded the cloth to have a narrower shape and have a knot that was nice and tight.

Another significant moment in tie's history happened in the 18th century in England, where Lord Brummer, who is often referred to as "the arbiter of men's fashion," focused a lot of his time on idealizing neckwear. The tie (called "cravate" at the time) was part of his regular attire, so he came up with several ways of making knots around the tie. It could be argued that Lord Brummer made the tie a fashion piece for regular civilians, and it wasn't just for soldiers or aristocrats as it used to be in previous years. (Independent)

So really, the tie has a very passionate history, with soldiers saying goodbye to their families and making the tie a symbol of uniqueness and heroism.

Over time, the tie presented several variations to represent certain groups or specific moments in history.

The Military Influence of Neckties

If you've seen a movie based on the 18th century or read a book from this time, you are probably familiar with the bright colors of military uniforms: red coats, white pants, and shirts. The brightness of the red was such that many historians argue this made them easy targets on the battlefield. Hence, they moved the brightness of such colors into the neckwear while maintaining a subtle color palette in the uniform.

Ties continued to remain important throughout the years, and different countries made their own versions and interpretations around this piece. The striped necklines, for instance, started in the British military back in the 1880s. The stripes were angled from left to right or "heart to sword". Each regiment had a different design that became a symbol of unity and identification where soldiers were able to represent themselves. Later, social clubs, boarding schools, and elite groups started using striped ties to represent their group.

But the design of ties wasn't arbitrary. Many of the colors from striped ties come from flags or banners that were chosen to represent a group of people in big gatherings. Fashion played an important role in making feel people united.

When the diagonal stripes arrived in the United States, the fashion industry adopted the design and flipped the direction of the stripes. (Instead of going left up and right down, they made them left down and right up). With the intention of introducing this design to the stores without having political conflicts with any regiments or social groups. Right now, diagonal stripes are fashionable and can be interesting and enhance different types of bodies as they won't make people look taller or wider as it happens with vertical and horizontal lines.

Now, each design has a history and a purpose behind it. Here are some of the most important ties you must know and how you can wear them:

Since the tie's origins come from military uniforms, the tie represented discipline, honor, and preparedness. So it was a matter of time until schools adopted neckties in their uniforms to communicate these values to the students, the new generation of citizens.

With wide diagonal lines of two colors where more often than not, one of those colors is navy, students and alumnus were entitled to wear these ties as a way to show their education and professional preparation. Several universities have their signature university tie that serves as a uniform symbol of unity and belonging among students.

As upper-class students are often related to youth, many people wear university ties for semicasual gatherings at work or outside of work. It can make a super cool outfit for a night out, but it may not be your most elegant choice.

​This is a signature piece in the history of fashion. As mentioned earlier, the traditional British stripes go left up and right down. These stripes have a history of authority, power, and military organization, so it is a great choice for public appearances and significant moments of your professional journey.

Brooks Brothers introduced the "right up left down" version of the British Regimental Stripe tie in the 20th century, you can use it for formal occasions and even match it with a printed shirt as long as there is color harmony and the print of the shirt is light and subtle.

A variation of striped ties that happened after World War II when significant changes happened in fashion.

Skinny stripes are more subtle and easier to style. They are versatile, so you can wear them for formal and informal occasions, and you can find them in a huge variety of colors.

This kind of tie appeared first around the 1920s, mainly by the working class. Workers handknitted them with wool to have a warm layer over their chest. The knitted tie gained popularity in the 60s and 70s when fashion companies started making them out of different fibers. Currently, this necktie is becoming more popular as there is a growing need for formal outfits that can be toned down and casual outfits that can level up. This is one of the most casual types of ties, so you can style it with jeans and sneakers. During the cold season, you can choose a wool tie and pair it with a sweater or cardigan of the same color family. It will look stunning!

Although the history of ties is full of meaning, symbolism, senses of unity, and discipline, the purpose of a tie in today's world is merely decorative. However, its history and its previous symbolisms help us to use this accessory in a more effective way when we are getting ready for a specific event or occasion. We have formal ties, casual neckties, some are associated with youth, and others are associated with authority.

You are now familiar with the origin of your neckties, what they mean, why do they mean that, and how you can leverage their full potential to use them as they are meant to. When we look at a military uniform from the 19th century, it still communicates authority. The intention of clothes prevails through time! So don't underestimate the power of this accessory to get your point across and choose your neckties carefully.

Getting to know your clothes gives you the opportunity to love them, respect them, and have a deeper relationship with them. What tie do you feel like wearing now?